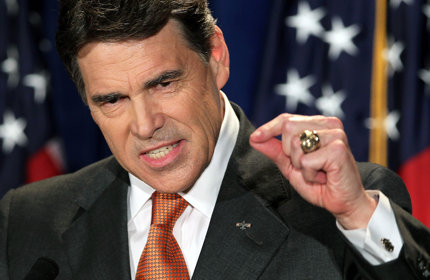 I first met Rick Perry in 1985. He was a Democratic freshman state rep, straight off the ranch in Haskell, Texas. He wore his jeans so tight, and, umm, adjusted himself so often that my fellow young legislative aides and I used to call him Crotch. Even among state representatives, even among Texas Aggies (graduates of this cute remedial school we have in Texas), Perry stood out for his modest intellectual gifts. Hell, he got a C in animal breeding. I have goats who got an A in that subject. But lack of brains has never been a hindrance in politics.

Mitt Romney should be shaking in his Guccis.

Rick Perry threw his hair in the ring on Saturday. His entrance into the GOP presidential field can be a game changer. Perry can raise money as well as Mitt. He can rally the base as well as Michele Bachmann, and he will say or do anything—annnnnnnyyyyyyything—to win. And in today’s Republican Party, if you want to be the nominee you have to be willing to do some really crazy s--t.

You'd have thought that Mitt Romney was the guy who would do whatever it takes. Like the defendant in a Stalinist show trial, Mitt has renounced everything about his prior life: his positions on gay rights, abortion rights, TARP, gun control, campaign finance, immigration, etc. Abandoning nearly everything you have stood for certainly evinces a desire to win (if not a steely spine).

1 Comments in Response to Rick Perry's Ruthless Drive to Win

This man is evil. Remember who was behind NAFTA selling out his country???? This man be one of them.