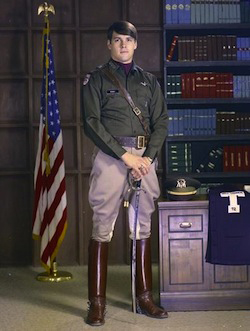 Could military veterans decide the Republican presidential contest? They largely tilted the GOP race to war hero John McCain in 2008, by delivering the critical swing votes in South Carolina and Florida, and by offsetting the enormous surge of evangelical voters toward former Arkansas governor Mike Huckabee in those two states. And now it appears they are poised to do it again – this time for Texas governor Rick Perry, a former air force captain who's the darling of veterans groups in Texas, and who just powered his way to the top of the GOP leader board following his dramatic entry into the race last Saturday. Perry still has his work cut out for him, of course. As the new GOP front-runner - he's leading Mitt Romeny and Michele Bachmann by 11 and 16 points respectively in the latest Rasmussen poll - he’s now the object of intense scrutiny, and it’s not clear how well he – or his mixed Texas governing record – will fare under the glare of a national spotlight when a single gaffe or misstep can prove costly. But most veterans groups, at least, appear to like Perry, thanks to his ongoing support for causes such as college tuition credit for soldiers on active duty. Even Texas Democrats like San Antonio's Leticia Van de Putte, who are critical of Perry’s conservative leadership have joined forces with Perry on veterans’ issues, a key area of bipartisan cooperation that Perry’s likely to start touting on the presidential trail. Perry and his fellow Tea Party darling Michelle Bachmann are scheduled to campaign head to head this week in South Carolina, where a quarter of the GOP electorate is comprised of soldiers or war veterans, one of the highest ratios in the country. Republican South Carolina Gov. Nikky Haley, who won election last November, has introduced legislation that wil make it easier for soldiers to vote in her state, another measure that is likely to help Perry.

1 Comments in Response to Rick Perry: The Caesar of Paint Creek, Texas

The racist Communist Chinese fund terrorism and genocide in the world to gain cheap resources to centralize the worlds resources to their 97% monopoly. Communist Chinese use Proxy agents then invade via SOE free trade zones after the economy is weakened by the fighting of proxy agents How the Communist Chinese Party and their espionage unit fund terrorist and genocidal dictators that oppress world women's rights. Over four years ago, America suffered the worst terrorist attack in its history, caused by a terrorist group largely known as al Qaeda. About a month after the attack, it was first reported that Communist China bought unexploded American cruise missiles from al Qaeda in order to "reverse engineer" them, i.e., use them to advance its own cruise missile capabilities. That report was just confirmed on Nov. 29. The subsequent silence from mainstream media has been deafening. What gives here? For over four years, as the democratic world has fought the War on Terror, Communist China has managed to stay out of sight and out of mind, despite the information above and immediately below. Even the pro-democracy, anti-Communist movement has largely been quiet on this. This remains a terrible and dangerous mistake. For those new to this topic, what follows is a quick synopsis of Communist China's actions regarding al Qaeda and the Taliban. 1998: After the American cruise missile attack on al Qaeda, Communist China pays up to $10 million to al Qaeda for unexploded American cruise missiles. 1999: A book by two Communist Chinese colonels presents a battle scenario in which the World Trade Center is attacked. The authors recommend Osama bin Laden by name as someone with the ability to orchestrate the attack. September 11, 2001 (yes, that date is correct): Communist China signs a pact on economic cooperation with the Taliban. Just after September 11, 2001: The Communist press agency makes a video "glorifying the strikes as a humbling blow against an arrogant nation." Also after September 11, 2001: According to Willy Lam (CNN), the Communist leadership considers al Qaeda to be "a check on U.S. power," and only decides to back away from it after deciding that "now is not the time to take on the United States." Also after September 11, 2001: As Pakistan mulls a request from the United States to allow its troops to be based there for operations against the Taliban, Communist China—a 50-year Pakistan ally—announces it would "oppose allowing foreign troops in Pakistan." Also after September 11, 2001: U.S. intelligence finds the Communist Chinese military's favorite technology firm—Huawei Technologies—building a telephone network in Kabul, the Afghan capital. November 2001: As U.S. Special Forces and local anti-Taliban Afghans are liberating Afghanistan, Communist China, through public statements and behind-the-scenes actions, tries to prevent what it calls "a pro-American regime" in Kabul. 2002: Raids of al Qaeda hideouts by U.S. Special Forces and allies net large caches of weapons from Communist China, including surface-to-air missiles. This comes weeks after the U.S. government warns that al Qaeda terrorists in the U.S. would try to use said missiles to take down American planes. April 2002: Then-Communist Chinese leader Jiang Zemin, while visiting Iran, rips the U.S. military presence in Central Asia. Late summer 2002: Almost a year after Afghanistan's liberation, a three-man delegation from the Taliban—led by Ustad Khalil, purported to be Mullah Omar's right-hand man—spends a week in Communist China meeting with cadres, at their invitation. August 2002: Intelligence from the post-Taliban Afghan government reveals that Communist China has turned a part of Pakistan deemed under its control (most likely "Aksai Chin," the piece of disputed Kashmir that Pakistan gave to its longtime ally in the 1960s) into a safe haven for al Qaeda. May 2004: Media reports expose how the Communist Chinese intelligence service used some of its front companies in financial markets around the world to help al Qaeda raise and launder money for its operations. Yet Communist China continues to claim that it is our friend in the War on Terror, and foolish supporters of "engagement" continue to believe it. Nothing could be further from the truth. It's not merely al Qaeda that has received Communist support (for more on Communist China's extensive ties to terrorists, check out my book on the subject), but given the nearly universal acceptance of al Qaeda as an enemy of the democratic world, one would think that the above information would be enough for a serious and thorough reexamination of our relations with the Communists. After all, Communist China's reasons for supporting anti-American terrorists are not difficult to ascertain. The U.S. is the main obstacle to the Communists' plans for conquering Taiwan, replacing Japan as the lead power in Asia, and replacing the U.S. as the lead world power. If Communist China fails in any of these, its reliance on radical nationalism—the regime's raison d'etre since the Tiananmen Square massacre—will backfire badly. Thus, the Chinese Communist Party sees the United States as the chief threat to its power, and its survival. Yet President Bush has not once demanded that Communist China end its support for al Qaeda—indeed, he has not even acknowledged the existence of that support. Sadly, he is not alone. In fact, those of us who insist on spreading the word about this are in the distinct minority. If we are to win the War on Terror, this must change. The War on Terror is, in fact, part of the Second Cold War—the cold war between Communist China and the democratic world. As such, the War on Terror can not and will not be won unless the free world sees the Chinese Communist Party for what it really is: an enemy. The road to victory in the War on Terror ends not in Kabul, Baghdad, Tehran, or Damascus, but in Beijing. America and her allies will never be secure until China is free. D.J. McGuire is President and Co-Founder of the China e-Lobby, and the author of Dragon in the Dark: How and Why Communist China Helps Our Enemies in the War on Terror. http://www.homelandsecurityus.net/al%20qaedas%20link%20to%20other%20countries/al_qaeda%20china%20tie.htm http://rideriantieconomicwarfaretrisiii.blogspot.com/ Rider I