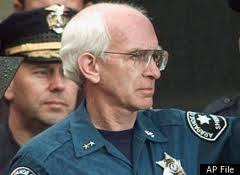 Every civil servant wants to experience his or her legacy firsthand--but not the way that onetime Arapahoe Sheriff Patrick J. Sullivan Jr. has. Sullivan, a nationally renowned law enforcement leader, was arrested on drug charges and is now being detained in the Denver area jail that bears his name.

Sullivan, who in 2001 was named the National Sheriff Association's "Sheriff of the Year," was arrested on suspicion of trafficking methamphetamines.

Local news station CBS4 began an investigation of Sullivan last month on a tip that he had agreed to meet a male informant, providing drugs in exchange for sex. He was subsequently arrested by the South Metro Drug Task Force and is currently being held on a $250,000 bond.

And in an incredible twist of fate, Sullivan now cooling his heels at The Patrick J. Sullivan Jr. Detention Facility, named in his honor.

"The allegations of criminal behavior involving Pat Sullivan are extraordinarily disturbing," said Grayson Robinson, Arapahoe County's current sheriff. "While the arrest of the former sheriff is very troubling, no one, and particularly a former peace officer, is above the law. This is the most shocking thing I've ever been involved with."