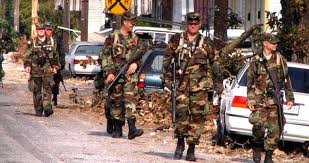 Lawmakers in Louisiana are calling for National Guard troops to patrol the streets of New Orleans after a toddler was killed in a drive-by shooting. The last time troops were involved in domestic law enforcement in the state, they were used to confiscate legally owned firearms in the aftermath of Hurricane Katrina.

Keira Holmes Gordon was caught in the crossfire of two separate groups of men in cars who were targeting another man stood near a B. W. Cooper Housing development on Sunday. The toddler, four days shy of her second birthday, was pronounced dead at the scene.

Citing soaring crime levels, state lawmaker Austin Badon Jr. told CNN he “wants the government to step and help control the violence,” by sending troops to patrol troubled areas, although he admitted that just “a select few people” were responsible for the crimes.

The CNN host makes clear that Badon is just one of several officials calling for National Guard troops.

“I have called on the Governor to bring in the National Guard,” said Badon, asserting that residents were “more comfortable” after seeing the Guard patrol the streets in 2005 during Hurricane Katrina.

“We are at war and when you’re at war, you have to bring in soldiers,” said Badon, describing the situation as “urban warfare,” and complaining about people who own guns.

A spokesman for Governor Bobby Jindal’s office said no request had been made from the mayor to send National Guard troops to patrol the streets.

Being that New Orleans hasn't had a legitimate police force for longer than I've been alive, it's not too surprising that it would be the "test case" for the abuse of the Constitution and a given mass of citizens - despite earlier abject failings. We are, of course, "suddenly" in a war, on the streets of America. When in history has the use of the military ever produced a less-than-tragic outcome?

Watch this one; it's liable to be coming to a city very near you!

Feel for the people of New Orleans...Then feel for all of us. In this case:  God might well forgive us; history will not!