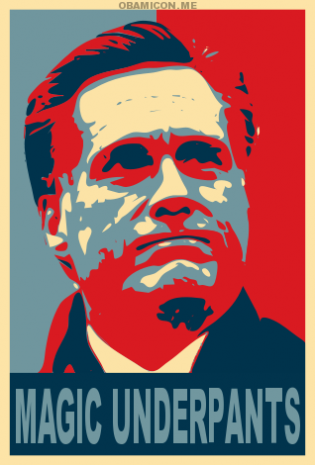 When Mormons were socialists
“You are cursed because of your riches!”
It was a bummer message that nobody wanted to hear. Samuel the Lamanite stood alone atop the great wall of the city of Zarahemla to warn the inhabitants of their pending destruction.
Now you have probably never heard of this Samuel, nor the capital city that was once the center of the Nephite nation. But Mitt Romney certainly has. In 6 BC, as the story goes, somewhere on the American continent, the inhabitants of this mythic city had grown decadent. There were extreme class divisions. Politicians were corrupt. The government disregarded the sick and poor.
Sound familiar?
God had called Samuel to essentially Occupy Zarahemla, to stand up and speak out against corporate greed and wealth accumulation. For his trouble, he was promptly thrown out the front gates. Undeterred, he bravely scaled the city’s exterior wall, evading a barrage of arrows and stones to stand defiant. He offered Zarahemla a choice: repent or be destroyed by God. Like any of us who have ever witnessed the ranting of a doomsday prophet, the Nephites couldn’t be bothered. Four hundred years later, Samuel’s prophecy would sorely come to pass. After decades of perpetual wars and extreme environmental upheavals, the inhabitants of Zarahemla were wiped completely off the continent and out of history.
They had been warned.
The rise and fall of the Nephite nation is a cautionary tale included in the Book of Mormon. The book purports to be the history of ancient American people, written by prophets who foresaw the present day and knew that calamity was coming. Joseph Smith reportedly translated the record by “the gift and power of God.” The prophetic message of the scripture is sharp; if Americans are obedient to God, we will be blessed with riches. If Americans set our hearts on riches and ignore the poor, we will be destroyed.
It’s an ontological dilemma facing every millionaire Mormon.

I guess Mormons think it`s ok to scam millions from the - Dept of Education.Maybe Mitt`s inside man is the Mormon God.

Do all "Mormons" think scamming Millions from the - Dept of Education -  is  what their God would do? Or! is the Mormon God the Inside Man Mitt talks about?

The Fatal Conceit Of Technocracy That Afflicts Most Policymaking

Funding Your Own Enslavement, the Curse of Liberty Ignored - Part Two

Lindsey Graham: Joe Biden 'scared the hell out of me tonight'