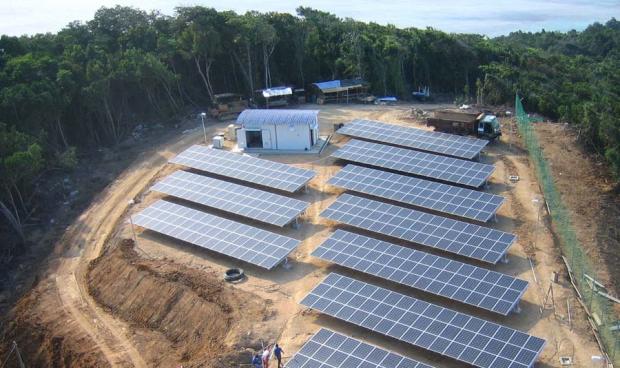 Last week SunEdison, one of the largest installers and financers of solar power, announced a new project that will deliver solar power to 30 villages in India. It’s already equipped one of these villages with solar panels, a small distribution grid carrying electricity to more than 70 houses, and battery backup system to provide electricity around the clock.

The first village is a pilot project that’s not expected to be profitable, says Pashupathy Gopalan, SunEdison’s managing director for South Asian and sub-Saharan operations. But he expects that economies of scale and refinements to the design and installation process will bring costs down, and the company could be making money within the next couple of years. “By 2014, we want to be able to scale up to thousands of villages,” he says.

The reason for SunEdison’s optimism is that plummeting prices for solar panels are making this type of electricity cheaper than power from diesel generators. “If the industry went after diesel displacement in a very big way, I think there is money to be had,” he says. “That’s where the money is if the industry wants to transition and not be dependent on subsidies.”

Diesel is a major source of power in south Asia and Africa, where many areas lack access to the grid and frequent blackouts prompt those who can afford it to install backup generators. These markets could help a solar industry that’s struggling with low profit margins due to an oversupply of panels. In turn, the lower prices for solar power could speed up deployment in poor countries by providing a more economical alternative to diesel-powered pumps and generators, and a much faster path to electrification than waiting for grid infrastructure.