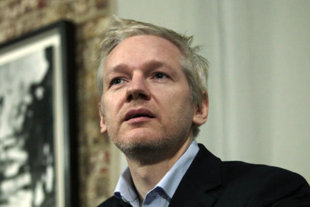 "We have decided to grant political asylum to him," Ricardo Patino said at the end of a long televised statement from the Ecuadorean capital of Quito, where he criticized the U.S. and U.K. governments for failing to protect Assange from political persecution.

"The countries that have a right to protect Assange have failed him," Patino said. "[Assange] is victim of political persecution. ... If Assange is extradited to U.S., he will not receive a fair trial."

The foreign minister said that Ecuador asked Sweden to promise it would not extradite Assange to the United States, but Sweden refused.

"Asylum is a fundamental human right," Patino said, adding that "international law" overrides local laws, and that Assange has "the right not to be extradited or expelled to any country."

A crowd gathered outside the Ecuadorean Embassy in London, where Assange, a 41-year-old Australian native, has been holed up since June, to hear the announcement. At least one protester was arrested.