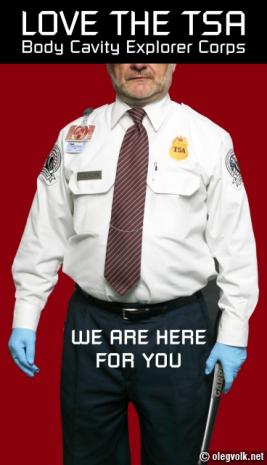 My wife and I had arrived at the airport to fly home to Phoenix after attending my wife’s grandfather’s funeral, via a layover in Atlanta on Delta #1176. We had cleared the security checkpoint without incident, but while waiting at the gate, a Delta supervisor informed me my shirt (this one here, designed by Cory Doctorow) had made numerous passengers and employees “very uncomfortable.”

NOT A SANE, CIVILIZED MAN WOULD DO …PERHAPS IN A MILLION YEARS!

This weird, "colored" Delta airline passenger with a threatening stature standing more than six feet tall and his wife – most likely notorious adult activist followers of Ron Paul from the "lunatic fringe" was determined to pull a "joke" by wearing a T-shirt with a logo threatening to harm TSA agents, Delta officials and passengers in the airport in the name of liberty and freedom to do anything he wants [the words "BOMBS 20mg" and "kill" were printed, among others, inside an enlarged orange round logo drawn right in front of the T-shirt].

Anyway, the bottom line is that this "loco" accompanied by his wife, was the one who caused their own travail and misery in the airport when they were detained, investigated and not allowed to board the airline. He was the culprit – not the TSA and Delta officials -- in this kind of story that "finds a home in this website".

So here is the take for our readers to know: While this weird flyer traveling with his wife did his stunt to scare airport security and airline officials and the rest of the passengers in the name of his personal liberty and freedom to do whatever he wants [actually what he did was abuse of personal liberty and freedom], TSA security and Delta officers subjected him and his wife to a rigid and thorough security check-up and investigation, which these culprit passengers now claim was a nightmarish ordeal they have ever experienced in life, but this time the ordeal or the "joke" was on them, in the name of security and safety of other passengers.

This traveling T-shirt-wearing oddball reasoned out that he was wearing the T-shirt only to MOCK the existing tight TSA security screening in the airport which he didn’t like at all but he didn’t mean to kill anyone.

Then as you read the whole story he posted on Twitters, he lapsed into a labyrinthine justification of his macabre action with a long-winded litany of excuses. One of these was racial. He claimed he happened to be "brown" not white that was why he was singled out and discriminated against. He accused Delta of being a racist, and argued with so many other irrelevant excuses for his misdemeanor. He claimed to have a colon cancer and did not want to go to an X-ray screening to aggravate his ailment, so forth and so on.

If he was telling the truth that he has a medical predicament, the more that he should be discreet and careful of his action, instead of acting irresponsibly like a juvenile delinquent having some fun in the airport of all places, wearing a "bomb" yarn and a "kill" prank T-shirt, and of all the worst time, while the passengers were about to board the plane.

Anyway, he was finally "cleared" by security – most likely TSA officials just looked down on him as some kind of a joking moron … but the Pilot did not allow him and his wife to board the aircraft... And he went ballistic accusing the Pilot of ignoring the security clearance of TSA officials for them to board. You may read his boring if not foolish tear-jerker, which is a hell of a long story projecting himself as the "victim" rather than the "victimizer" that he really was.

Well, his protestation against the action of Delta’s Captain and Pilot of Flight #1176 is plain IGNORANCE, which by the way, is common among Ron Paul supporters from the "lunatic fringe" when they converge on the street and march any of their protest under the sun. This crank is unaware that Captains of airplanes and ships are by law vested with authority to make decisions for the safety of passengers on board. They can even perform marriage aboard their conveyance. The Pilot who was the Captain of the Delta airline, did not allow this loony to board because the rest of the passengers were fearful of their presence aboard the aircraft.

In other words, the Captain has the authority and responsibility to see to it that the passengers are safe, comfortable and not fearful of any tragic incident that could occur in their flight.

If you ask me, this traveling abuser of liberty and freedom who thinks he can do anything he wants, was still damn plain lucky. For the sake of the passengers he threatened and scared to death, he should have been subjected to "waterboarding" to make him cough out the real intention behind his stupid gag.

The FBI and Homeland Security should have taken over jurisdiction and full responsibility of investigating and finally deciding whether or not this man should be allowed to travel.

There is no room for any kind of compromise for the security and safety of air travelers – the only reason why a repeat of 911 [blowing up of airlines by terrorists] has NOT occurred for several years now!

When we are traveling, my life and yours and that of our family traveling with us, are absolutely not a joking matter! How stupid can this guy get, is beyond belief -- a reality that is not of this planet!

US Orders Private Airlines to Assist in Military Operations

Travel to the North Pole on board a luxury airship

US airlines divided over vaccine mandate