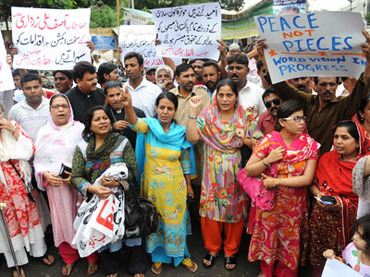 ­The detention of Rimsha Masih has sparked outrage and divided Pakistani society. Christian rights groups have demanded her release along with amendments to the penal code, while enraged Muslims call for the girl to be burned alive.

The Pakistani Interior Ministry has reportedly asked the Islamabad police to reject Rimsha’s bail request on the basis that there was a serious threat to the girl’s life and the lives of her family.

Her family members are thought to have been taken into protective custody.

An interior ministry official speaking on condition of anonymity told BBC Urdu that Rimsha would be safer in custody until the matter has been resolved and the public has “cooled down.” He added that the situation could easily spiral out of control if rushed.

In spite of reports that the girl was so traumatized she could barely speak, Islamabad police sent a preliminary report to the Interior Ministry saying the girl had admitted to burning the sacred book. A medical board had also been set up to ascertain the state of Rimsha’s mental health.

The All Pakistan Christian League held a protest in Karachi on Saturday, calling for police to drop the charges of blasphemy set against the 11-year-old and the launching of a judicial inquiry into why a minor with mental impairments was arrested in the first place.

They also called for the amendments to the penal code, chanting “Stop killing innocent people in the name of blasphemy”, “Abolish the blasphemy law” and “Talibanization not acceptable”.