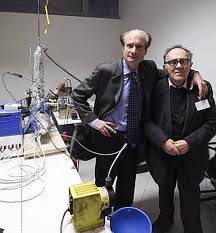 PESWiki covers the spectrum of clean energy technologies. While we address conventional methods such as solar, wind and geothermal; we specialize in unconventional or "exotic" modalities such as cold fusion, overunity electromagnetic motors, magnet motors, gravity motors, and vortex technologies. Here are five of the best exotic technologies we've found so far, which are closest to the market.

Featured / Top 5: Electromagnetic >
Motor-Generator Self-Looped with Usable Energy Left Over - Featuring a number of systems in which a motor turns a larger output generator, and the generator is producing enough energy to keep the motor running, as well as enough left over to power other things. A starter motor, temporarily, gets it going; then it stays going until turned off. Energy source could have something to do with phase angle harvesting vacuum energy. (PESWiki; September 5, 2012)

Featured: Electromagnetic / Thermal Electric > Steorn >
Steorn Definitely Not Dead -- Free Energy Technology Coming - Steorn is under contract with the two largest corporations in the electric hot water heating market worldwide. One HephaHeat product will cost about as much as the electric water heater it's replacing, but will consume 1/5 as much electricity. With this marketplace vindication in as little as 18 months from now, they will then open the technology to other applications. (PESN; September 22, 2012)

Featured / Top 5: Nuclear > Cold Fusion > Brillouin >
Brillouin: "Understanding How LENR Works Will Enable Us to Be First" - Robert Godes, inventor of the controlled electron capture reaction (CECR) being commercialized by Brillion Energy Corporation of Berkeley, CA, says that understanding how "cold fusion" works gives them a strong advantage to move ahead of the other players to make it first to market with affordable, clean, distributed nuclear power. (PESN; April 19, 2012)