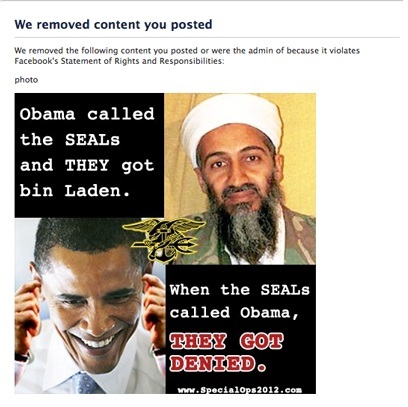 UPDATE: Facebook Manager Andrew Noyes emailed the following to Breitbart News this morning: We wanted to follow up on the Special Operations Speaks PAC (SOS) article published on Breitbart.com last night. I assure you that removing the image was not an act of censorship on our part. This was an error and we apologize for any inconvenience it may have caused.

Over the weekend, Facebook took down a message by the Special Operations Speaks PAC (SOS) which highlighted the fact that Obama denied backup to the forces being overrun in Benghazi.

The message was contained in a meme which demonstrated how Obama had relied on the SEALS when he was ready to let them get Osama bin Laden, and how he had turned around and denied them when they called for backup on Sept 11.

I spoke with Larry Ward, president of Political Media, Inc -- the media company that handles SOS postings and media production. Ward was the one who personally put the Navy SEAL meme up, and the one who received the warning from Facebook and an eventual 24 hour suspension from Facebook  because Ward put the meme back up after Facebook told him to take it down.

Here's what Ward told me:

We created and posted this meme on Saturday after news broke that Obama had known and denied SEALS the backup they requested.

Once the meme was up it garnered 30,000 shares, approx. 24,000 likes, and was read by hundreds of thousands of people -- all within 24 hrs. On Sunday, I went into the SOS Facebook page to post something else and found a warning from Facebook that we had violated Facebook's Statement of Rights and Responsibilities with our meme. So I copied the warning, put it on the meme as as caption, and re-posted the meme to the Facebook page.

Along with the re-posted meme, Ward put a link to the Facebook "feedback comment" inbox so visitors to the SOS page could send a message to Facebook if they were as outraged over the meme being jerked down as he was.