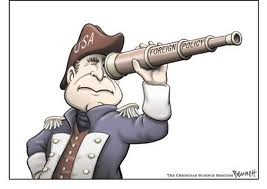 Doug: Well, that's only the second time I've ever called a US presidential election accurately, so I won't let it go to my head. However, although I know most readers were rooting for Romney because he appeared to be the lesser of two evils, it's quite arguable that we're better off – for the long run – with the disastrous Obama.

Let's look at the bright side: first, as you mentioned, Obama will get blamed for the Greater Depression. But also, Romney appeared even more warlike than Obama, and war is the health of the state. Despite the US's huge, unsustainable deficits, he actually promised to increase military spending – presumably using money borrowed from the Chinese. Plus, he promised not to cut medical and welfare spending. But those are consequences we'll never see now.

The actual reason Obama won, in addition to his promises of a free lunch for everyone, is that people are much more socially liberal than in the past. They don't want the state putting its nose into their bedrooms with bans on gay marriage, abortion, and the like. Romney was a throwback to the '50s – even down to that phony, condescending smile that was always painted on his face. So let's batten down the hatches for four more years, recognizing there were no good choices.