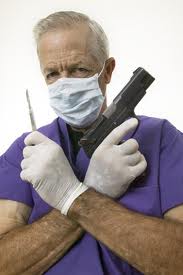 Using this same standard, should we ban hospitals?

What about 32,000 deaths from automotive accidents, should we ban cars?

Why are guns a higher priority than motor vehicle fatalities, or medical malpractice fatalities?

Someone could say "Ah ha! But we need cars and hospitals, we don't need guns!"

The argument that we don't need guns is highly debatable, but lets consider for sake of argument something that we don't actually need, cigarettes and alcohol.

Annually around 435,000 people are killed by tobacco related illnesses and 83,000 die from alcohol related causes, should we have prohibition of cigarettes and alcohol?

Haven't read the article, but how many lives do guns and hospitals save? And automobiles are part of the lifeblood of the nation. and what about freedom to use hospitals or guns? So, how do you make an honest comparison unless you include all aspects. Does this article do so?

Automobiles are responsible for 31,000 deaths per year, in America!!!

OMG!  WE NEED TO BAN HOSPITALS!  And, automobiles, because automobiles kill many more people, per year, than guns, too!

Great article. Just to add my 2 cents of support of putting things in the right calm and clear perspective: On average 4 million americans die each year in the normal course of life and death. So while the Conneticut massacre is genuinely another tragedy, the sky is not falling. No matter how hysterically the Fed. government and Media Chicken Littles scream. Our children are still very safe, even if this is not the last such tragedy.

The truth is we don't have to do anything more than thank God that our children are still very safe. If someone feels motivated to do "something"more then consider the heartache that the surviving parents must feel and see how you can help - without running to the Church of Government Protection & Control.