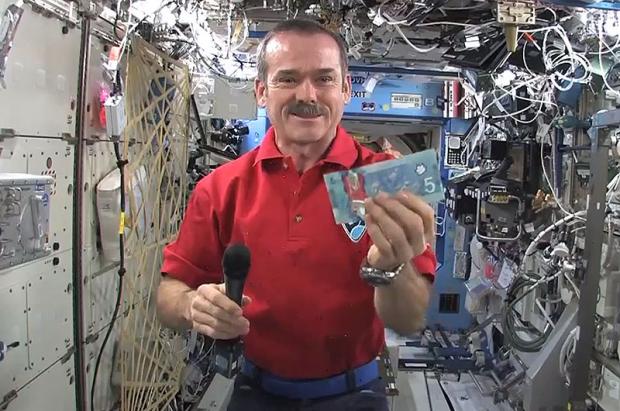 The Bank of Canada had appropriate help Tuesday (April 30) launching its new space-themed $5 bill – the Canadian commander of the International Space Station.

"Let me show you an example of how we can reach new heights of innovation," Canadian Space Agency astronaut and Expedition 35 commander Chris Hadfield said, while revealing the astronaut- and robot-arm-adorned bank note from on board the orbiting complex.

Hadfield held up the new blue-color note and let it float in front of him during a live broadcast from the space station. [Chris Hadfield's Video Guide to Life in Space]

According to the Bank of Canada, the new $5 bill features "leading-edge security features" as already present in the $20, $50 and $100 polymer notes now in circulation. The bank also released its new $10 note today, which depicts a Canadian train.

. The new $5 and $10 bank notes depict the frontiers of our country and our planet," Bank of Canada Governor Mark Carney said. "It is fitting that we are today crossing the final frontier for a world first — the unveiling of a bank note from space."

The new bills include transparent and holographic design elements, making them part of the most secure bank note series ever issued by the Bank of Canada. The polymer series is also described as more economical, lasting at least two and half times longer than cotton-based paper notes, and they will be recycled in Canada.

Interview with Patrick Moynihan about Epicenter and Epic Cash

Mighty Yuan, US 10 year and inflation

Mastercard Will Start Supporting Cryptocurrencies Directly on its Network

What's Next for Crypto Regulation