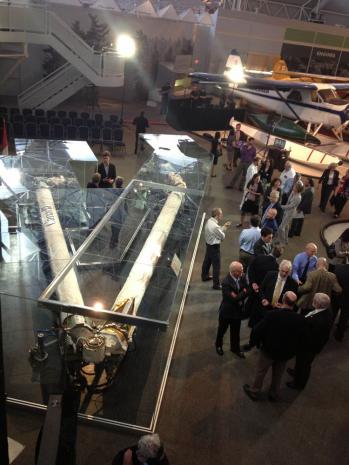 After clocking nearly 100 million miles in orbit, one of the space shuttle

program's huge robotic arms was unveiled to the public Thursday (May 2) at its last stop — a museum in the country's capital.

The 50-foot (15 meters) Canadarm 201 completed 27 space shuttle flights before embarking on its latest mission as a permanent display at the Canada Aviation and Space Museum in Ottawa.

This particular Canadarm was the first to fly in space, riding aboard the second-ever shuttle mission back in November 1981.

Canadarm — known by NASA as the shuttle remote manipulator system (SRMS) — also sparked the genesis of the Canadian astronaut program, which hit a high note in March when astronaut Chris Hadfield assumed command of Expedition 35on the International Space Station.

"In a sense, it's because of Canadarm that I can even be in space," Hadfield said in a video message from orbit that was played at the change-of-command ceremony.

Canadarm 201's success on its maiden flight prompted NASA to extend an invitation for Canadians to join the shuttle program. The first astronaut, Marc Garneau, flew in 1984.

We Should REALLY be Concerned About THIS! - Elon Musk (Richest Man On Earth) | Create Quantum Wealth

Hyundai develops an autonomous vehicle that sprouts legs to WALK across...

Spot's Got an Arm!