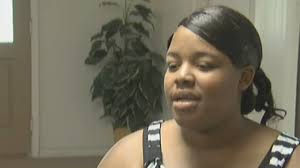 The incident was captured by security cameras at the Jasper, Texas, police headquarters.

Keyarika "Shea" Diggles, 25, was brought to the jail on May 5 for an unpaid fine, according to Bernsen. He said she was was on the phone with her mother trying to arrange to get the $100 owed when Officer Ricky Grissom cut off the call.

There’s no audio on the video, but Diggles and Grissom were apparently arguing when Officer Ryan Cunningham comes in behind Diggles and attempts to handcuff her. When she appears to raise her hand, Cunningham grabs Diggles by the hair and slams her head into a countertop. The officers wrestle Diggles to the ground before dragging her by her ankles into a jail cell.
She got her hair pulled out, broke a tooth, braces got knocked off … it was brutal,” Bernsen said.

Diggles was charged with resisting arrest for arguing with the officers, a charge dropped on Monday, according to Bernsen.

Cunningham, reached by phone Monday afternoon, hung up on a Yahoo News reporter. A message left for Grissom was not immediately returned.