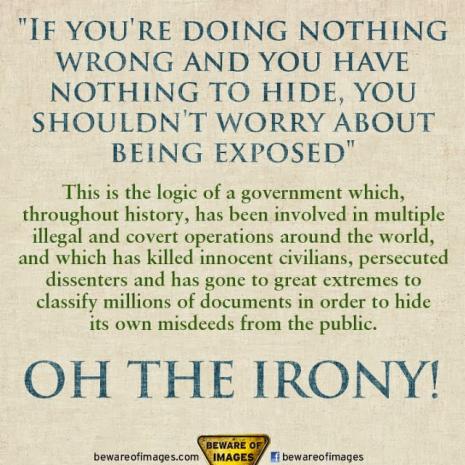 As for NSA spying, the notion of “done nothing wrong, nothing to worry about” clearly is NOT true anymore. It was based upon the premise that government can’t arrest you without cause and if they did the courts will defend you and sanction them. That’s no longer true. Even as the US media is filled with intentional leaks of minor “mistakes” by the NSA and some thousands of “unintended” violations of our privacy which leave the impression that spying is “no big deal” or “doesn’t affect me,” we learn of the police-state tactics used to intimidate journalists working to uncover the real story behind this domestic spying scandal.

This week British police illegally applied anti-terrorism laws to detain Glenn Greenwald’s (David Snowden's interviewer)  Brazilian partner, David Miranda, for 9 hours at the London Heathrow airport without any terror link whatsoever. They violated his privacy, property and right to travel, all in the name of terror. Trouble is, journalism isn’t terrorism and being the mere domestic partner of a journalist doesn’t meet the criteria of the law either. But what is really disturbing is that the government clearly doesn’t care what the restrictions of the law are. They do what they want to do and the courts are letting them get away with it. That affects everyone’s liberty even though you may not realize it until YOU get detained for no reason at all.

David Miranda did nothing wrong, was still detained and no court will side with him as long as the state can throw out the excuse of National Security against terror. However, with all the bad press, and the threat of a wrongful detention lawsuit, the British government suddenly declared they found thousands of classified British documents on Miranda’s computer, supposedly justifying their violation of his rights.

Miranda was not carrying the Snowden files (which did reveal this week that the Brits are operating a Middle East spy center, where the British have tapped into the underwater fiber-optic cables which pass through the Middle East on behalf of the NSA), so it’s highly probably the government planted the classified documents on his computer—just like bad cops learn to plant drugs in someone’s car in order to justify an illegal search. Here’s what happened as he was detained, according to his own account speaking with the Guardian. Nobody should be subjected to this kind of unlawful questioning simply on layover in a country, when no laws have been broken.

1 Comments in Response to Nothing to Hide...Still Better Worry!

You are right!! It is the crooks and criminals who have something to hide. And the BIGGEST crooks and criminals who are hiding things from you are the U.S. Government and the NSA... to say nothing about the CIA, FBI, the military, the police (your outstanding warrants... at least until they serve them on you), and a whole lot of other Government and One-World-Government (Interpol) agencies.