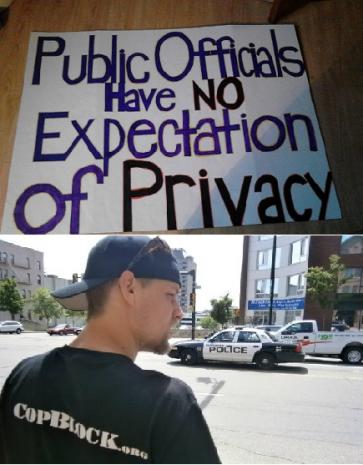 The Cop Block co-founder had already served three months in jail when a lawyer appealed the conviction and had it reversed earlier this year because of improper jury instruction from the judge.

Judge Kenneth Brown had instructed the jurors to determine whether Mueller had “purposely” violated New Hampshire’s wiretapping law when he called police and school officials seeking comment about an incident caught on video showing a school cop beating a student.

The law requires the court prove he “willfully” violated the law by calling public officials. The difference, explained below, can be fully explored in the opinion:

Mueller had always maintained that public officials do not have an expectation of privacy when conversing on public phone lines with the general public, so it is difficult to prove he willfully recorded the public officials, knowing he was violating the law in doing so.

Nevertheless, Hillsborough County District Attorney Michael Valentine, the same prosecutor from before, insists on taking it to trial again rather than choosing not to refile.

The trial is scheduled for July 14 before the same judge.

This is what Mueller had to say about it on Cop Block:

Some might call this double jeopardy, while (some) lawyers claim the system is working as it should and many think Michael (the DA) would be insane to go through with this second trial. Yet, having spent enough time with Michael I feel comfortable saying that he’s not a man of principle, has little to no interested in doing what’s right and probably has no say how far this case goes. Why? Because he’s just an errand boy.

Nevertheless, this won’t be the same trial it was the first time around. I’m done playing in the state’s playground with their lopsided rules and lack of common sense. Nope, I (and many others) have already shown that a court room is the last place you’ll find justice in this world. So even if Michael doesn’t snap out of his puppet controlled life and simply drop the charges, Brandon and I will work to end this case quickly.

And it should be very interesting, considering the state’s hand is exposed (they have to prove my state of mind per the Supreme Court Ruling) and one of the three witnesses is now a FORMER state employee. Yep, the principle (Mary Ellen McGorry) resigned after a secrete investigation. I’d also be willing to bet that she isn’t the same witness, willing to appease her former state employed colleagues, as she was when taking the stand against me in our first trial.