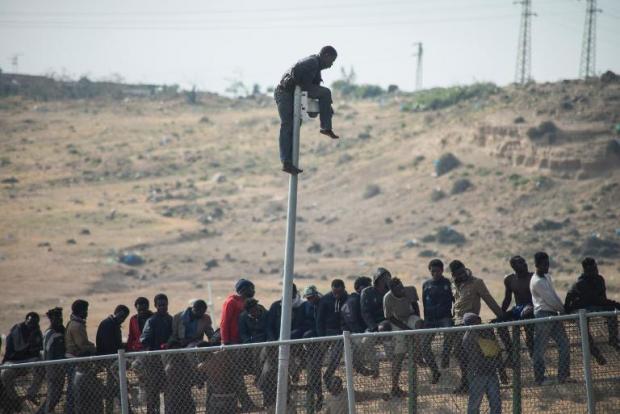 "According to elements gathered by our association, these barriers will be five metres high and will be topped with blades," said the activist, who is based in the coastal city of Nador, near Melilla.

Adil Akid, an activist from the Moroccan Human Rights Association, said ditch-digging work had begun on the Moroccan side of the border with the intention of building a wall.

Melilla, on Morocco's northern coast, provides one of only two land borders between the European Union and Africa, along with another Spanish territory, Ceuta, to the west.

Both have seen a flood of illegal border crossings by African migrants seeking a better life in Europe.

In March, 1,000 people tried to jump a Spanish built triple-layer fence separating the city from Morocco, with half of them getting through -- the biggest such crossing in nearly a decade.

This month, 140 migrants managed to cross into Melilla during an early-morning surge of 500 people desperately trying to make it onto Spanish soil.

The territories, which sit across the Mediterranean from Spain, are a draw for migrants who do not want to make the treacherous journey to Europe by water.

In February, 15 migrants are believed to have drowned in Moroccan waters while trying to swim to Ceuta from a nearby beach.

Wuhan Coronavirus Hits the US: What Preppers Need to Know