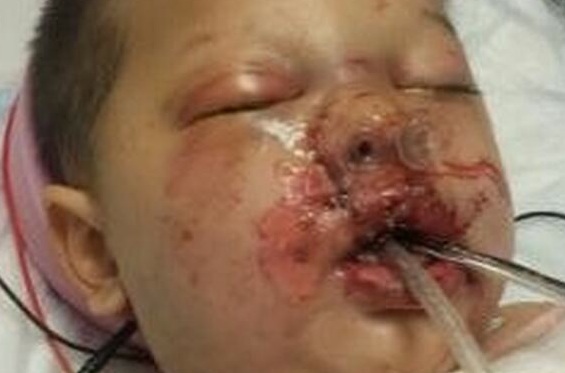 After nearly killing baby Bou-Bou, Sheriff Jerry Terrell's maniacal jackboots immediately moved to cover up their crime, preventing the anguished parents from comforting their shattered 18-month-old, obstructing their view of the crime scene, and lying about what they had just done. Their first priority, as always, was "officer safety," which includes establishing a cover story immediately.....

1 Comments in Response to Sheriff Joey Terrell, The Coward of Habersham County

Because this incident is so extremely urgent - unlike getting a notice that your phone bill is overdue - it's hard to say exactly what Karl Lentz might do if it happened to his kid. But here is what he might do:

1. As soon as possible after the raid, he would demand by letter that his property - his child - be returned to him, or at least be placed under his authority.

2. When his paperwork was ignored - like it would be - he would file NOT a complaint, but a CLAIM with the county court clerk.

3. The CLAIM would be short, max 3 or 4 lines, including items like:

A. He is a man making the CLAIM;
B. The claim is a claim, not a complaint or counter-complaint; this throws the whole thing under common law;
C. Since he had already contacted the sheriff by letter - which was ignored, but he has certified proof he sent it - he would demand verified (possibly validated) claims by all raid participants (his filed claim would name them and state that it is in their private, non-governmental capacity;
D. demand from them verification of ownership of the property, his child;
E. demand the return of his property, the child.
F. One thousand dollars per day that his claim remains outstanding... that his property, the child, is not returned to him.

4. In court, he would make sure that it was under common law (a court of record; all state courts are common law courts - check it out) - the judge and attorneys cannot speak unless they have first-hand knowledge of the things involved in the claim - since it is man to man, nobody can speak except by affidavit (verification and validation) if they have first-hand knowledge that the property rights of the parents are other than the claimant claims by his affidavit.

5. In the event that someone else claims ownership of the child by affidavit, there would be a jury trial to determine who the owner is, and who should have the property returned to him.

6. Depending on how the claim and affidavit are worded, the thousand dollars per day might be required from each raider involved in the raid, or from their bond, or their insurance.

Note that these websites have quite a few audio presentations to listen to. I think that they are worth it, if only for additional knowledge.

Karl seems to be having great success with what he is doing. It seems that he has coached many folks to have success using his method, in the U.S., Canada, and Great Britain, because they are COMMON LAW COUNTRIES.