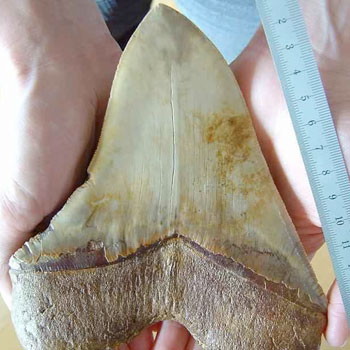 Karachi | A giant prehistoric shark previously thought to be extinct for more than 20 million years has been captured by local fishermen off the coast of Pakistan, reports the Islamabad Herald this morning.

The giant creature first thought to be a great white shark was rapidly declared by experts to be an unknown species of shark as it's great weight and size were unheard of. Analysis of the teeth suggest the shark to be a parent of the Megalodon, an extinct species of shark that lived approximately 28 to 1.5 million years ago, during the Cenozoic Era.

The sea creature that measures an incredible 10.4 meters and weighs an astounding 15.6 tons is the largest living shark ever caught to date, great white sharks reaching an impressive 7 tons at full growth, a size that is no match for this giant prehistoric shark that can reach an imposing 20 meters in length and possibly weight up to 30 tons, depending on estimates.

"This is an incredible opportunity to work on a real specimen instead of trying to figure out the whole picture from different fossil composites" admits Smithsonian paleontologist Jeff Mayor, visibly enthused by the discovery.

The specimen was revealed not to be fully grown and is estimated to be 2 or 3 years old and already twice the size of a full grown white shark, which takes 5 years to reach its full growth.

A quick autopsy revealed the creature lives under great depths, feeding on giant squid and other fish not commonly found near the surface, which makes the discovery even more incredible to experts.

"Are rising sea temperatures forcing these beasts to come up closer to the shores or was this animal simply hurt and suffering from a disorienting handicap, these questions are left unanswered" claims local marine biologist Rajar Muhammar.

The giant sea creature had a total of 276 teeth in its jaws, spanning 5 rows with it's biggest tooth measuring an incredible 15 cm

The recent discovery has raised great enthusiasm from experts abroad who are pondering the fact that other thought to be extinct species might still be dwelling in the depths of the seas. "This is very exciting news for the future of ocean exploration as technology is permitting us to go deeper and deeper every day" explains marine biologist Suzan Chopper from the University of Sydney, Australia. "I just don't know how well our submarines would do against a giant monster like this" she adds.

1 Comments in Response to Giant species 15-ton shark, thought to be extinct, caught off coast of Pakistan

Someone call Speilberg! I've an idea for a dual spin movie: "Jurassic Jaws."

The Genetic Panopticon: We're All Suspects in a DNA Lineup, Waiting to be Matched with a Crime

Police Are Using Newborn Genetic Screening to Search for Suspects...

THE END OF GERM THEORY