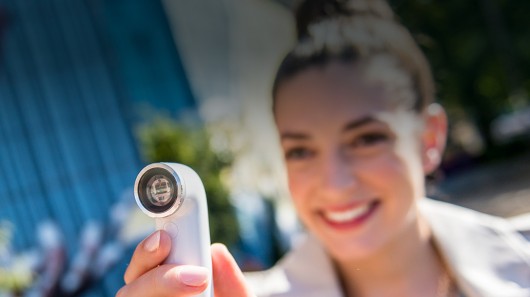 The RE has a 16-megapixel CMOS sensor, an f2.8 146-degree lens, and records 1080p/30fps video. A sensor in its hand grip automatically turns the camera on when it's picked up – there's no power switch. From there, a quick tap of its single shutter button snaps stills, with a longer press required for video.

Using the upcoming Android/iOS RE app, users can access recording features such as time-lapse, plus the app screen serves as a remote viewfinder for setting up and reviewing shots.

Footage/photos can be streamed to a paired smartphone (and onward to the cloud) via Bluetooth, and recorded on a user-supplied microSD card. One charge of the RE's 820-mAh battery should reportedly be good for approximately 1,200 photos or 1 hour and 40 minutes of continuous video recording.

It's available now for pre-order, priced at US$200. US shipping is expected to start in November.

U.S. Gets a Debt Warning From Fitch as Stimulus Battle Rages