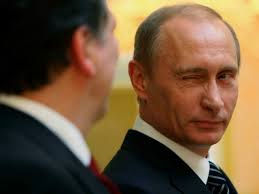 Who will deter "aggression"? Who will defend the "rules" against those "rogue states" just waiting for an opportunity to wreak havoc, if not the United States of America?

No "mainstream" politician dares challenge this mythology, and those academics and popular writers who do so risk being marginalized. Challenging the motives of our wise rulers isn't good for your career: that is, not if you want to have any influence in Washington. And while it's okay to question whether this episode of meddling or that murderous invasion is really in our interest, the benevolence and historical legitimacy of the American empire is not to be questioned. Because, after all, the theoreticians of imperialism say, without the stability enforced by America's military supremacy "liberalism" could not exist.

This is how the world is seen inside the Washington Beltway, where the monuments of Empire loom large and more than half the population owes its livelihood to the Imperium. Outside that bubble of hubris and skyrocketing real estate values, however, the world looks to be quite a different place – as does America's role in it.

To an Iraqi citizen, who has watched his nation be torn to pieces by the American eagle, stability is the last thing he associates with the Americans. To a Libyan who had hopes his country might evolve into something more than Gaddafi's playground, "order" fled the moment the Americans intervened.