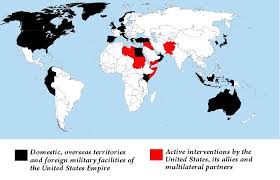 With that, let's begin:

DB: That brings us to our larger topic of US imperialism and war….Let's begin by pointing out that since you grew up in a communist country, you tend to believe that US militarism is not as widespread or fierce as some think it is.

TM: For my money, the expansionist geopolitics is found mostly with Russia, China, Japan and so forth. What else would one call Putin's stance? But such generalizations are nearly impossible to ascertain as either true or false.

I agree that generalizations are not useful – however, they can be of advantage when speaking with an audience that holds a common understanding of certain terms.  Machan has contributed articles to The Daily Bell for years – he certainly must have some understanding of the context of the terms used within the community.  Machan seems to avoid this notion throughout this interview.

But what on earth are the specifics?  Japan?  This isn't 1931.  What has Japan done since 1945 to deserve inclusion in this group?  China?  If China has made any substantial act of war in any region farther than 200 kilometers of its borders in the last couple of decades, I am not aware of it.

Russia?  Putin is no saint, but at worst whatever is happening in Ukraine is the offspring of many fathers – both east and west.  Even if one grants that Putin is an imperialist, does this automatically negate the possibility of any other imperialist regimes on earth?  Why deflect?