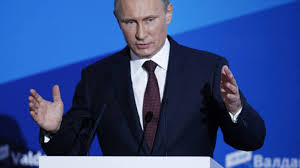 Most people in the English-speaking parts of the world missed Putin's speech at the Valdai conference in Sochi a few days ago, and, chances are, those of you who have heard of the speech didn't get a chance to read it, and missed its importance. (For your convenience, I am pasting in the full transcript of his speech below.) Western media did their best to ignore it or to twist its meaning. Regardless of what you think or don't think of Putin (like the sun and the moon, he does not exist for you to cultivate an opinion) this is probably the most important political speech since Churchill's "Iron Curtain"speech of March 5, 1946.

In this speech, Putin abruptly changed the rules of the game. Previously, the game of international politics was played as follows: politicians made public pronouncements, for the sake of maintaining a pleasant fiction of national sovereignty, but they were strictly for show and had nothing to do with the substance of international politics; in the meantime, they engaged in secret back-room negotiations, in which the actual deals were hammered out. Previously, Putin tried to play this game, expecting only that Russia be treated as an equal. But these hopes have been dashed, and at this conference he declared the game to be over, explicitly violating Western taboo by speaking directly to the people over the heads of elite clans and political leaders.