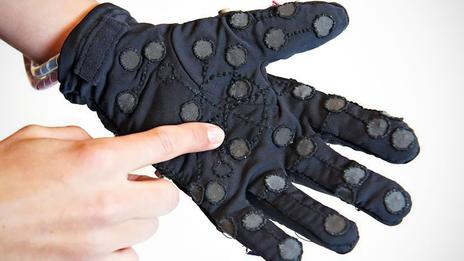 He was nine. But children are natural innovators. "We started to invent languages and forms of communication just because we were kids and we wanted to play," says Schwengber. "It was annoying that he couldn't hear me, and I couldn't write something down," she says. So the two invented their own tactile language.

As Haug and Schwengber grew older, they replaced their private language with one that is more widely understood: Lorm, a tactile alphabet spelled out with strokes to the hand. It was invented in the nineteenth century by Hieronymus Lorm – an anonymous pseudonym, for Austrian-born poet, journalist, and novelist Heinrich Landesmann – and is still used today by the deaf-blind community in German-speaking countries.

It's difficult to overstate the importance of Lorm to Haug and Schwengber. But Lorm, and other forms of tactile signing, have their limits. A reliance on physical contact between communicators has historically constrained the social circles of the deaf-blind to those they can meet face-to-face (or more accurately hand-to-hand) on a regular basis – and even within this relatively small group of people, only those who take the time to learn and practice Lorm can really become part of a deaf-blind individual's social network.