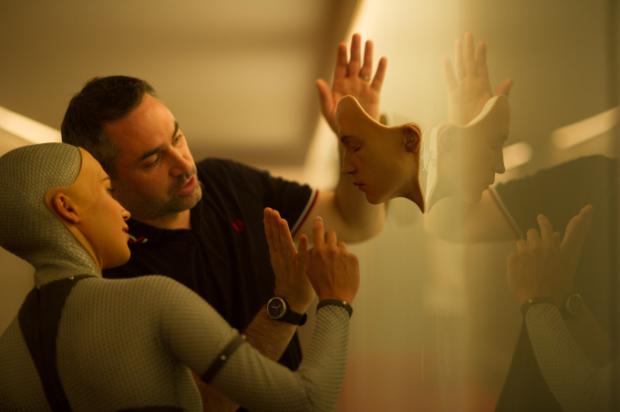 Regardless of what you think about the campaign (I didn't have a problem with it, but then I've always found Tinder chats to be awkward and slightly surreal), it certainly fit with the film's plot. In Ex Machina, Caleb (Domhnall Gleeson), an employee at a large, Google-esque company, wins a contest and gets to spend a week with the company's reclusive founder Nathan (Oscar Isaac). Turns out, however, that Nathan has something specific in mind — he wants Caleb to interview Ava (Alicia Vikander), an artificial intelligence housed in a female, humanoid body, and determine whether or not she's achieved true consciousness.

Of course, there's more going on than Nathan will admit, and tense, sexually fraught hijinks ensue.

Ex Machina is also the directorial debut of Alex Garland, who previously wrote The Beach (the novel) and 28 Days Later (the film). Garland was in New York City last week to promote the movie, and we spent a few minutes talking about the new film's big ideas.