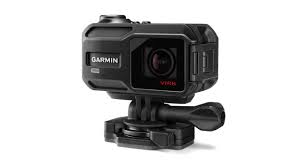 GoPro is the first company most people think about when they hear the words "action camera," but that doesn't mean its competition can't find clever ways to sell their products. Garmin tried this with its last camera, the VIRB Elite, and now it's looking to do the same with two smaller cameras that promise to be much more capable: the VIRB X and the VIRB XE.

The new cameras come in a much smaller form factor than the Elite, which was oblong in shape with a camera facing out from one end. The smaller and more rectangular X and XE, on the other hand, look more like ruggedized GoPros than anything. The two models are also tiered in their price and quality, much like how GoPro offers "Black" and "Silver" models. The X is the more basic model and will cost $299, while the XE — which has slightly better internals — will run $399.

Inside the XE, Garmin is offering the ability to shoot up to a resolution of 1440p at 30 frames per second, or 1080p at 60 frames per second. It also has a "pro mode" that lets users make common adjustments like white balance and exposure while also tweaking less common settings like sharpness control and ISO limit. The video capabilities of the X top out at 1080p at 30 frames per second, and both cameras can shoot 12MP still images. Both are also equipped with Wi-Fi and Bluetooth, and Garmin says each camera should get about two hours of battery life. There's no crazy slow-motion shooting or 4K resolution available here, but that's a game Garmin would likely lose anyway; its competitors already do that really well.

Garmin's game is to aim for the truly sports-minded user, something I found out when I tested the Elite against the other leading action cameras last fall. While its video quality didn't stack up against the others, it did offer some rather unique features. The Elite was ruggedized, it had really good battery life (most competitors have trouble eclipsing an hour; the Elite easily passed that), and it could keep track of data like GPS and heart rate. It also was able take that data and, along with other information like speed and acceleration, overlay it right on your video so your friends would know just how fast you were, say, biking down a trail.