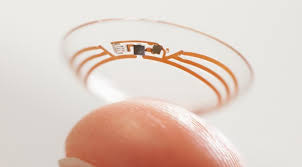 Last month, Google got approval for a much-ballyhooed patent—a powered contact lens with built-in blood glucose monitoring ability. It's a major milestone for the company's famous GoogleX lab, which has dazzled in the media but yet to produce many actual consumer products.

Whether or not Google intends to truly begin developing the world's first consumer electronic contact lens, other major players are also showing interest in the computing potential of the eye. Corporate giant Johnson and Johnson recently filed multiple patents for all manner of smart contact lenses, from monitored drug-delivery lenses to smart in-eye UV filters.

On the surface, each successive announcement makes it seem as if the eye will be the next great battleground in consumer electronics, and sooner rather than later—but alas, auto-focusing contact lenses and and in-eye digital cameras remain almost entirely hypothetical. Simple, extremely low-powered contact lens devices—such as glucose monitors or ocular pressure sensors—may soon make their way into the mass market, but their arrival won't bring the wilder dreams of science fiction all that much closer to reality.

It's not for a lack of trying. The biggest problem? Actually building the things.

"It's a big obstacle in the way of a product, let's put it that way," said Eric Tremblay of École Polytechnique Fédérale de Lausanne (EPFL), who revealed a working, zoomable contact lens last month. Though they collaborated with some of the world's most advanced vision science companies, Tremblay's team was still hard pressed to construct a complex device inside a contact lens; all of the actual electronics had to be housed in an associated pair of glasses, outside of the lens itself.

The workings of the zoomable contact lens illustrate how difficult it is to design for the eye. EPFL's lens is only safe for extremely short-term wear; putting a magnification device in the eye required that the lens be made of a resilient polymer called PMMA, which is gas-impermeable and starves the eye for oxygen. Newer versions have channels dug out to allow airflow, but these have only modestly increased the maximum wearing time.

Thick scleral lenses—the sort used in movies to make an actor's eyes appear completely black—are required to provide a stable platform for a tiny mirror telescope literally glued together with biologically safe adhesives. Meanwhile all the actual electronics work goes on inside the glasses, which switch the polarization of incoming light to determine whether or not that light will be bounced through the lens' magnifying mirrors before entering the eye. None of the components in the contact lens actually move or receive power.

As Tremblay put it, their revolutionary work with the contact lens can be boiled down to "jamming some fairly complicated optics" into an object with about the surface area of a penny—except the circular area directly in front of the pupil must be kept free of obstructions to avoid blocking the user's vision, giving researchers even less room.

The zooming lens is an incredible achievement, but it only skirts the problems with building smart contact lenses, rather than actually solving them. We do know that Google's glucose-monitoring contacts have functioning internal electronics, and they are designed to be worn continuously—but does this mean they have a platform from which to launch the age of true in-eye electronics?

Sadly, the glucose monitor's own pedigree implies that's unlikely to be the case.

Back when their contact lens projects were still in the planning phases, Google hired a University of Washington researcher named Babak Parviz. Parviz went on to head up the company's wearable Glass initiative, but there's no doubt about why he was hired in the first place: his team's astonishing success with fabricating electronics for use on the surface of the eye.

More than six years ago, Parviz and team managed to create electronic contact lenses embedded with working LEDs. They were entirely contained on the surface of the eye, with every necessary component built right into the soft polymer disc.

Control, data, and even power all entered the lens wirelessly, and the team even managed to use gas-impermeable PMMA sparingly, allowing good airflow to the eye. The device was so successful the team even began to experiment with more complex displays, layering multi-pixel and multi-color images over the user's vision. (The only "users" they ever had were rabbits, though.)

Electronic contact lenses embedded with working LEDs were only tested on rabbits. Image: University of Washington

This achievement makes a simple glucose monitor seem relatively trivial—perhaps a powerful sign that much more complex in-eye electronics are right around the corner. But in one of my previous interviews with Parviz, he made it clear he didn't think the technology was "anywhere near" ready for such continued advancement. When asked why that was, he almost floundered. "For... any number of reasons!"

It's easier to understand Parviz' skepticism when you know the incredible effort his team had to expend to get their assembly working.