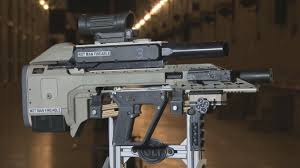 The Canadian Army is testing out smart rifle t?echnology to create weapons that are lighter, have greater firepower, and can use data to help soldiers be more precise. Though they've only been experimenting with prototypes, the rifles give us a glimpse of what the high-tech military weapons of the future might look like.

Franklin Wong, a defense scientist for Defense Research and Development Canada, told me they are focusing on three broad categories of weapons advancements: increased firepower, increased connectivity, and lighter weight. Increasing firepower can be as simple as attaching a grenade launcher to a rifle, while more lightweight weapons can be developed using advanced materials such as polymers or even through crafting lighter ammunition. The prototype in the video above, for example, weighs about 19 pound even with a grenade launcher, compared to the 22-pound, launcher-equipped C7 rifles currently in use by Canada's soldiers.

The trick is balancing the desire for lightweight weapons with the goal of building increasingly powerful guns. The DRDC is also checking out a bunch of data sensors and communicators that can transmit a soldier's exact position or a view of his or her target.

"When we talk about connectivity, we're talking about a powered data rail, which doesn't exist on weapons today," Wong said. "It's putting these electronics onto the weapon that help it pass data from sensors onboard the weapon to other places."

That data could include GPS tracking to help with coordinated team attacks, Wong said, or even electro-optical cameras to transmit on-the-ground views. The DRDC is also looking at tracking technology that can automatically detect targets and help soldiers line up the shot. But the one thing the guns can't do is be fired remotely, Wong said, stressing that the soldier holding the rifle would always be in full control.

At the moment, the Canadian Army doesn't have any plans to actually use these weapons.

Washington's Energetic Generals and the Emphasis on Preparation for Nuclear War

One Third of US Troops Are Rejecting Covid RNA Vaccine

Report: Biden Regime Planning To Keep National Guard in D.C. Until End Of 2021

With Biden's 'full support,' the Space Force is officially here to stay

Mark Smith on What It's Like to Be a Fighter Pilot