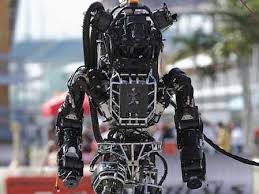 The robots have always been coming. But this week, as the specter of intelligent machines dominates the Convention on Conventional Weapons discussions at the United Nations, and as some of the most powerful tech firms in the world join the military-industrial complex, it seems the evolving relationship between us meatbagsand robots has entered an exciting, sobering new era.

Take two six-foot-tall, 330-pound bipedal humanoid robots named ATLAS and ESCHER. They're not Terminators, but they sure resemble those iconic killer robots from the big screen. When Motherboard gained exclusive access to ATLAS and ESCHER, both of which are funded by the US military, we couldn't help but ask their human operators if that comparison comes up a lot.

"We do get that a lot," said David Conner (no relation to John), a senior research scientist with Virginia Tech's TORC Robotics. With millions of dollars in funding from the Defense Advanced Research Projects Agency, the Pentagon's blue-sky research lab, TORC services one of seven ATLAS robots, which are built by Google-owned Boston Dynamics. The idea, Conner said, is for ATLAS and similar platforms to help—not kill—humans.

Is Rivian Preparing To Offer Its Own Insurance Policy?

There Will Be A Lot More Rioting, Looting And Civil Unrest As The U.S. Economy Continues To Crumble

Tucker: Ballot harvesting makes a mockery of the secret vote