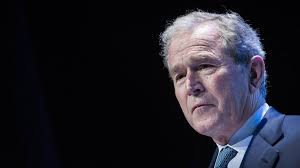 George W. continues to haunt the Republican Party and damage its electoral chances. At home, Bush has been staying out of public gaze; abroad, he is widely hated and limits overseas travel due to fear of war crimes arrest for his 2003 invasions of Iraq.

Republican spin doctors and the rightwing US media has been trying to soft soap Bush and his mentor, Dick Cheney, for years and slowly expunge their disastrous Iraq and Afghanistan Wars that opened a Pandora's Box of horrors across the Muslim world. Democrats who cheered the war have equally sought to dodge responsibility. However, Hillary Clinton can't seem to escape her tawdry war record.

The US, claim the Bush/Cheney amen chorus, was "misled" into invading Iraq by "faulty intelligence," misled by the hope to promote democracy among the benighted Muslims; on a noble quest to remove a frightful dictator Saddam; and, of course, the famous missing "weapons of mass destruction."