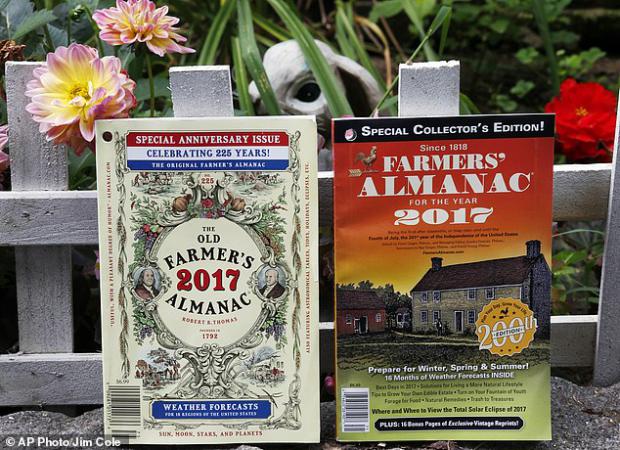 One of them, the Farmers' Almanac based in Lewiston, Maine, is celebrating its 200th edition this month with traditional gardening tips, home-spun humor and life hacks.

In New Hampshire, The Old Farmer's Almanac marks its 225th anniversary with tributes from President Barack Obama and Canadian Prime Minister Justin Trudeau, among articles on mangrove forests and presidential beer preferences. Both have special anniversary sections with articles from the past.

In Maine, the long-term weather forecast calls for a teeth-chattering winter for the eastern two-thirds of the nation. 'We're calling it the return of the old-fashioned winter. The ice cold winter is back,' said Sandi Duncan, managing editor.

Janice Stillman, editor of the New Hampshire publication, said the coldest, snowiest conditions will be along the Canadian border, down through southern New England and the Appalachians.

'The irony to me is that the 'mitten' of Michigan will probably not need mittens this winter,' she said. 'They're the one spot along the border, really, that is predicted to be relatively mild.'