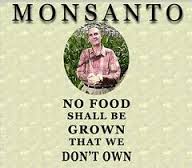 (NaturalNews) There is little that agribusiness giant Monsanto won't do to make a buck and to spread it's genetically modified, unclean seeds and food around the world, even if it means taking advantage of a country that has been decimated by war.

As reported recently by Mint Press News, with the assistance of the U.S. government, Iraq's seed and agriculture industry was decimated by Monsanto and other U.S. corporations. In May 2003, after the second Iraq war officially ended, American diplomat Paul Bremer was appointed to head up an occupational authority, which was essentially the controlling arm of Iraq. During his tenure he issued 100 orders that established a rebuilding strategy, which included Order 81 titled, "Patent, Industrial Design, Undisclosed Information, Integrated Circuits and Plant Variety Law." To view it, click here.

Physician and environmental activist Dr. Dahlia Wasfi gave an explanation of how devastating this order was in a 2008 presentation.

"Before 2003 they had a well-functioning, centrally-controlled seed industry that had developed over the years a rich seed variety for almost [every] variation of wheat in the world today," she said, as cited by Mintpress News.

Wasfi further noted that Iraqi farmers were able to achieve that success by adhering to ancient traditions of saving, replanting and sharing seeks from earlier harvests. As historians have noted, modern agriculture stems from these seed techniques that originated around 5,000 B.C.E., in a region of the Middle East that includes Iraq.

The war, along with previous years of sanctions against the government of Saddam Hussein, were also key factors in decimating Iraq's domestic seed industry.

In her presentation Wasfi said Monsanto marketed seeds to Iraqi farmers that contained "terminator genes," which effectively prevent seeds from being planted for future crops. Though Monsanto owns the technological patent for such seeds, it has not used it and has instead opted to charge royalties when Monsanto genetic materials are found in crops.

In addition, Wasfi explained that the order paved the way for other international agricultural corporations like Cargill Inc. and Dow Chemical to exploit Iraqi farmers. These companies gain profits from GMO seeds and special cancer-causing herbicides like Monsanto's Roundup, which are typically used together.

Trump is right about Iraq: Time to end the mission and withdraw all troops

The Irrational Logic of Leaving Troops in Iraq

Trump Must Back Iraq Withdrawal Promise With Action

"Terminate Bush's War": Trump To Reduce Troops In Iraq By One-Third Just Ahead Of Elec