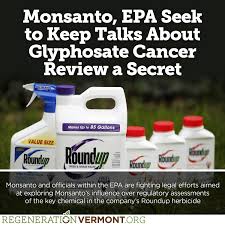 "For once in your life, listen to me and don't play your political conniving games with the science to favor the registrants. For once do the right thing and don't make decisions based on how it affects your bonus.".... These words, penned in 2013 by former Environmental Protection Agency (EPA) scientist Marion Copley, have an urgency seldom found in the dry correspondence that is typically passed between scientists. But this was no ordinary memo; it was an appeal, a desperate plea for action. And it was written on her death bed.

The letter is addressed to Jess Rowland, at that time the head of the EPA's Cancer Assessment Review Committee (CARC). It begins by noting 14 separate effects of glyphosate (a herbicide marketed by Monsanto under the name "Roundup") known to the EPA. As Copley explains in the letter, "any one of these mechanisms alone listed can cause tumors, but glyphosate causes all of them simultaneously." She argues that the CARC should change its assessment of glyphosate from a "possible cause of cancer" to the more definitive "probable human carcinogen." And she excoriates Rowland himself, noting that his "trivial MS degree from 1971 Nebraska is far outdated" and that as a result CARC science is 10 years behind the literature. She charges Rowland and his colleague, Anna Lowit, with intimidating staff and changing reports to favor industry interests. And she ends with these haunting words:

"I have cancer and I don't want these serious issues in HED [the Health Effects Division] to go unaddressed before I go to my grave. I have done my duty."

She may have done her duty, but she did not get her wish. Just 9 months later she was dead, and the EPA still listed glyphosate as a "possible" carcinogen.

The most controversial Supreme Court case since Bush v. Gore will decide who is president...