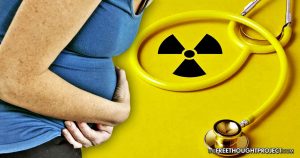 Between the years of 1945 and 1947, researchers at Vanderbilt University conducted a twisted experiment in which hundreds of pregnant women were exposed to radiation intentionally for the purpose of testing how it affected both the child and mother.

The study was funded by the U.S. Public Health Service and overseen by the Tennessee State Department of Health. All of these women were poor and had no knowledge of the experiment, and were never informed that they were a part of a study.

Somewhere between 750 and 850 women were given trace amounts of radioactive iron in a "cocktail" drink during their pregnancies by health officials they trusted. Dr. Paul Hahn, the lead researcher behind the experiments, claimed that the study was intended to record the absorption of iron during pregnancy.

However, in the years since, many pundits and journalists have theorized that these experiments were a part of a military study to learn about radiation exposure. When the university was finally investigated for these experiments in the early 1990s, Department of Energy Spokesperson Mary Ann Freeman revealed that Vanderbilt University conducted research experiments involving radiation for the US military during the Cold War.