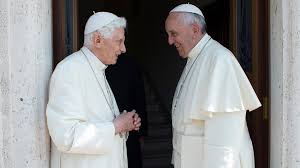 When he retired, the ultra-conservative Pope Benedict XVI was expected to disappear from view, clearing the way for his liberal successor, Francis, to clean house in the notoriously corrupt Vatican. Instead, he stayed, setting the stage for a de-stabilizing brawl over morality, theology, and the Church's horrific legacy of sexual abuse.

Over a plate of double-egged fettuccine and two bottles of Antinori Chianti at our usual trattoria in Rome's old city, the Vatican monsignor is gossiping about the late Pope John Paul II: how he wore Penhaligon's aftershave from Harrods of London; how, as a bishop in Poland, the future Pope camped out with his philosopher friend Anna-Teresa Tymieniecka. Now he's showing me how John Paul mockingly gave a discreet Nazi salute toward the backs of a departing group of German bishops.

"When I raised my eyebrows disapprovingly at his antic," says the monsignor, "he punched me hard on the arm. It hurt!"

He's my Deep Throat, my Sotto Voce, purveyor of unattributable whispers in Vatican cloisters. A middle-echelon member of the Vatican bureaucracy, known as the Curia, he gestures smoothly with his wrists, showing off pure-white cuffs and gold links. "This place," he says with a smile of self-conscious irony, "floats on a sea of bitchery!"

The Future Is Here

Trump declares churches 'essential,' calls on them to reopen

One Ring to Rule Them All

America Is Losing Its Last Line of Defense From Absolute Takeover

Why Is The Defense Department Purchasing 500 Million ApiJect Syringes?

Cops And Catholics Starting To Stand: Where Are The Evangelicals?

The Satanic Nature of the Global Elite, a Christian View - Great Invu with Jay Dyer by Roosh (Video)

Despite Orders Amid Coronavirus Pandemic, Northwest Side Church Does Not Require Masks, Allows Hugs

A World Without Christianity…