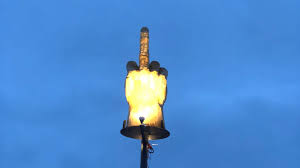 Frequent Reason readers probably know that zoning regulations can be a bit...let's just say cumbersome. Over the years, we've covered countless stories about the government getting in the way of citizens building what they want on their own private property. But most citizens don't respond the way Ted Pelkey of Vermont did.

First, a bit of background. Pelkey runs a monofilament recycling and truck repair business with his son. For years, he says he's been trying to move his business from Swanton, Vermont, to Westford. To do that, he needs a permit to build an 8,000-square foot garage on his property in Westford. But the town has been giving him issues.

"We've been trying to put a business there for the past 10 years," Pelkey told the Burlington Free Press. "It's just never-ending. They're railroading us really good," he added, explaining that his business is "a low-impact thing" with "such little traffic you'd wonder if we were open."

So why won't the town of Westford let Pelkey build the garage? Vice News reports:

The Westford Selectboard and Development Review Board had denied Pelkey's requests for the large garage, asserting that his applications did not meet the town's standards for a variety of reasons. Among them, Pelkey's application lacked necessary information about lighting that will "likely be needed for security purposes," and did not effectively describe the purpose of the building, officials said.

Pelkey isn't buying it, instead claiming the town review board is biased against him. "The strain (with local officials) has been there for 10 years," he told the New Haven Register. "They don't like us."

Governor wants kids to rat out their parents' Covid violations

Bill would ban cellphone use for those under 21