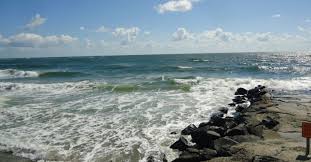 The data suggest a continuous submarine aquifer system spans at least 350 km of the U.S. Atlantic coast and contains about 2800 km3 (2.8 trillion tons) of low-salinity groundwater. The findings can be used to improve models of past glacial, eustatic, tectonic, and geomorphic processes on continental shelves and provide insight into shelf geochemistry, biogeochemical cycles, and the deep biosphere.

This could be a significant resource with potential for future offshore groundwater production. Given the 90 km offshore extent, 350 km distance between profiles, about 200 m thickness and 45% average porosity, we estimate the aquifer system contains at least 2800 km3 of water with salinity less than 15. If we consider the potential northeast and southwest extensions beyond our profiles, there may be several times more groundwater underlying the northeast portion of the U.S. Atlantic continental shelf, representing a freshwater resource that rivals the largest onshore aquifers. Utilization of such groundwater would require desalinization and effects such as upconing should be considered prior to extraction.