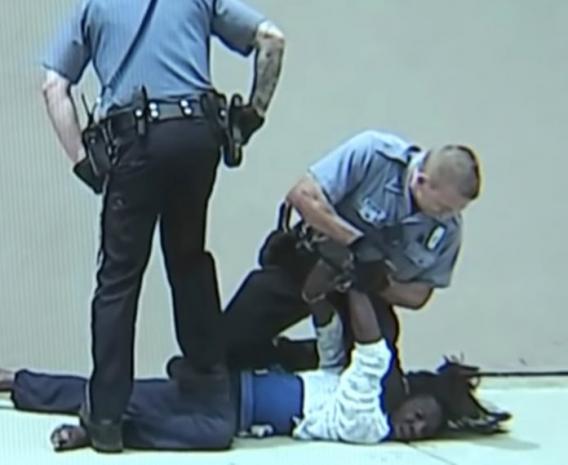 Here's a new one – or at least, a newly admitted one: Pain Compliance.

This is the use of physical torture to subdue the victim of it to Authority.

The fish does, indeed, rot from the head down.

In the video below – taken in Kansas City and the subject of a local CBS news affiliate story – a man happened to be in the vicinity of a pair of AGWs who were applying Pain Compliance to the person seen handcuffed and prone on the ground. The Pain Compliance technique applied in this case involves threatened dislocation of the subject's shoulders, a literally medieval practice that is not only excruciatingly painful but something which can easily cause lifelong pain.

An AGW Apologist explains that handcuffed and prone people can "still be a danger" to AGWs. In fact, the only "danger" is to the Authority of the AGWs, which remains affronted when any person isn't entirely supine and screaming in agony.

Rioting protester is set ablaze by his OWN Molotov cocktail in Portland...

Jacob Agonistes; or, the Wounded Martyr

Report: NFL to Allow Names of Those Killed by Police on Helmet Padding

Deputy in California KICKS a black man who had his hands above his head during an arrest...

Cops clear BLM protesters from outside the White House with tear gas and rubber bullets...

'You're choking me!' Black jogger, 33, screams as he's forcefully arrested in San An

Details Emerge on the Jacob Blake Shooting: Further Lessons For a Civilized Life