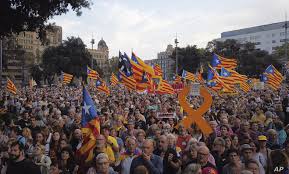 More rallies were held in towns across northeastern Catalonia region of 7.5 million people, where separatist sentiment has been on the rise for nearly a decade.

They are being watched by all sides as a sign of the independence movement's strength and its capacity to keep its more radical elements from tarnishing its reputation of peaceful struggle.

The demonstration in Barcelona departed from a central square and toured some of the schools that were stormed by riot police two years ago when they were turned into polling stations for the illegal vote.

Many carried pro-independence flags and shouted "Not forgotten, not forgiven!" — a reference to the clashes between voters and police during the referendum.

Police in Barcelona estimated 18,000 participated. One year before, on the anniversary of the vote, police estimated 180,000 marched in the coastal city, while activists stopped traffic on highways and blocked train lines.

Tuesday's referendum anniversary protests took place amid a strong police presence, especially in train stations and on highways, but there were no transit problems due to protesters reported.