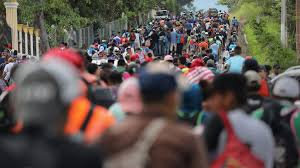 Over the weekend, Mexican authorities halted a caravan of more than 2,000 migrants headed to the Mexico–US border, reported AP News.

Authorities intercepted the migrants in Tapachula, a city located in the southeastern state of Chiapas in Mexico, near the Guatemalan border. The caravan included migrants from Central America, Africa, and the Caribbean.

AP said many of the migrants fled their countries because of increasing violence and collapsing fiat currencies, and all wanted the chance of a better life in the US.

"I want to pass through Mexico, I don't want to live here," said Amado Ramirez, a migrant from Honduras who was traveling with his children and wife, hoping for a transit visa from Mexican officials. "We're at a standstill."

The caravan was just 24 miles into their journey, along a major interstate under the supervision of human rights officials before Mexican federal police officers surrounded the group.