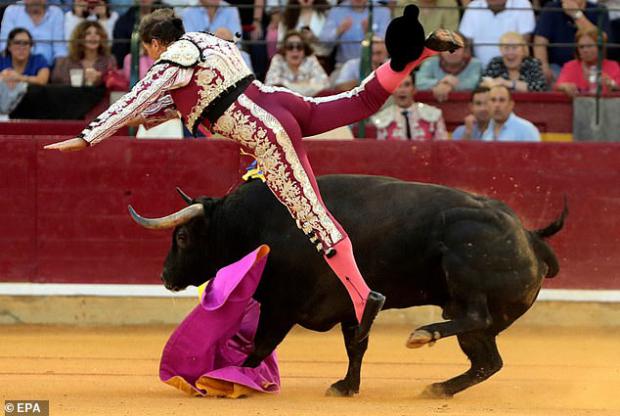 A Spanish bullfighter has suffered 'cataclysmic' injuries after being gored twice during a fiesta, giving him three heart attacks.

A bull tore into Mariano De La Vina, 57, leaving him with a 27cm wound through his groin, severing his femoral artery, and another 22cm tear between his rectum and bladder, severing another vital artery.

De la Vina was taking part in the El Pilar fair when he was charged by the bull which knocked him to the floor, gored him, lifted him into the air and dragged him across the bullring before attacking him for the second time.

Family and friends say it is a 'miracle' that he is still alive after reportedly suffering three cardiac arrests because of the severity of the injuries he received in the Plaza de Toros.

They have hailed the speed and expertise of medics and surgeons, both at the bullring's infirmary and a private hospital in Zaragoza where the injured bullfighter underwent two lengthy operations.

His injuries were so severe that his surgeon described the situation as 'cataclysmic' and said every hour would count towards his survival chances.

He has now come off a ventilator and started to regain consciousness, with his blood flow appearing to have been stabilised. His condition is still very serious but doctors are optimistic.

France: Ongoing Yellow-Vest Protests Against Pension Cuts Is a Growing Conflict with No ...