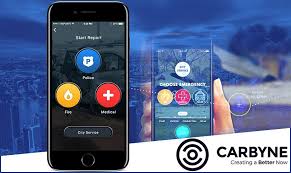 While some states and counties do update their computer systems and databases from time to time, often spending excessive amounts of taxpayer dollars to do so, the majority of police, ambulance, and fire first responders are using antiquated technology in a world which is passing it in leaps and bounds. Essentially, while you're using an iPhone, your first responders are stuck using rotary phones. Thankfully, we now have a solution that is cost-effective, easy to use, visually appealing, and will help save thousands upon thousands of lives every year.

For the past decade, more and more people are using cell phones and other wireless devices. Our ability to communicate with anyone, anywhere, has become a fact of life that we all accept. Technology has progressed to such a point where we no longer have to think twice about our kids going out late at night because we can always phone, text, email, Skype, or iMessage them. For the overly-worried parents (of which there are many) location apps such as Find My iPhone allows them to track their children down to a few foot radius.

But none of the technologies have transitioned to the law enforcement communities. To this day many emergency services have to make do with using cell tower data from your provider like Verizon, AT&T, or T-Mobile. This data can often be incorrect or incomplete and lead first responders in simply the wrong direction. So why can't emergency services, the people we rely on to save our lives, find us in the event of an emergency?

A patchwork of old technology, supplanted by new technology, has led to a mishmash of legacy systems being unable to undertake what we consider to be basic tasks.

The truth is that the modern 911 system was developed in the 1960s and hasn't seen much of an upgrade since then. As new technologies emerge, 911 and emergency services try their best to catch up. What we have is essentially a patchwork of old technology supplemented by some newer technology. What this means is that while first responders can do some things well, like find your location if you're on a landline, they are far more limited in more modern communications, such as finding you from your cell phone. It's why the first question an emergency dispatcher will ask you is not "what is your emergency?" but 'what is the LOCATION of your emergency?". There has been case, after case, after case of cell phones connecting to towers far away and routing the call to the wrong county. If an Uber driver can find us in the middle of nowhere, why can't 911?

MIND GAMES Elon Musk wants to connect your BRAIN to a computer...