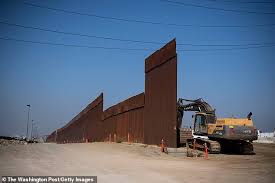 Smuggling gangs in Mexico have continuously sawed through President Trump's controversial border wall using every day power tools, according the U.S. agents and officials with knowledge of the incidents.

The security breaches, made with a popular cordless reciprocating saw that can sell for less than $100, has been used to open gaps large enough for people and drug loads to filter through.

When fitted with 'specialized' blades, the tool can break through one of the wall's steel and concrete bollards in just minutes.

The Washington Post reports that after slicing through a bollard, smugglers will push the steel out of the way, allowing an adult to fit through the opened space.

A severed bollard can allegedly be moved out of the way with a simple car jack.

Chandrasekar said: 'You could use another device, like an abrasive saw, that would go even faster, but they create sparks because they operate at a high speed.'