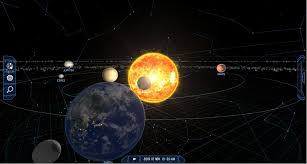 In the Eastern USA and Canada, the moon will set mid-eclipse. But skywatchers in the west will be able to watch the entire eclipse, as shown here near the end of the eclipse at 6:15 a.m. PST in San Francisco, CA. By telling you where in the sky it will occur, your astronomy app can help you plan to observe or photograph any eclipse.
(Image: © SkySafari App)
On Nov. 11, 2019, the world will witness a rare transit of Mercury across the disk of the sun. You'll need a telescope equipped with a proper solar filter to view the five-hour event — but whether you can see it at all depends on where you live.

In this edition of Mobile Astronomy, we'll highlight the 2019 transit of Mercury and tell you how to use your favorite astronomy app to preview it and follow the progress of speedy Mercury across the disk of the sun. We'll also show you how to virtually view past and future transits, and even fly to Mars and Jupiter and watch Earth transit the sun!

Mercury orbits the sun every 88 days. From our vantage point here on Earth, the speedy planet passes the sun twice in every orbit — once when it's between us and the sun, and once when it's on the far side of the sun. These events are called solar conjunctions, and all planets experience them. But only Venus and Mercury can produce solar inferior conjunctions — when they pass between us and the sun.