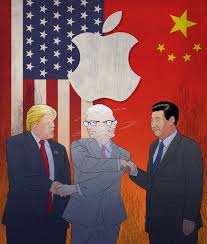 The casual flippancy with which the NBA turned, shrugged, and genuflected to China was shocking to more than a few Americans, many of whom expected the most American of corporations to muster at least an attempt at sympathy for the struggle of Hong Kong to maintain its democratic independence from the mainland government.

But in fairness, it shouldn't have come as such a shock. The NBA has had a lot of role models for how to suck up to China — particularly from the world of Big Tech.

And on Tuesday, some in Congress were intent on taking notice.

In the Senate Judiciary Committee's Subcommittee on Crime and Terrorism, GOP Sen. Josh Hawley of Missouri convened a hearing to examine just how deeply American tech companies have prostrated themselves to Beijing. The answers were more than a little unsettling.

Hawley opened the hearing with a statement chastising the two companies that had been summoned to the hearing, but failed to appear: Apple and a wildly popular Chinese-owned social media app, TikTok.