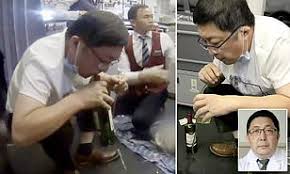 Incredible photos show a doctor sucking urine from an elderly man's blocked bladder after he was unable to pee during a flight from China to New York.

The 70-year-old passenger was on a China Southern Airlines plane on November 19 when he asked for immediate assistance and told cabin crew he was unable to urinate.

Flight attendants asked if there were any doctors on board. Luckily two vascular surgeons, Dr Zhang Hong and Dr Xiao Zhangxiang, were.

A makeshift catheter to extract the urine didn't work and the doctors determined the man's bladder was close to rupturing.

So Dr Zhang used a plastic tube and spent nearly 40 minutes sucking almost a liter of liquid waste from the man's bladder with his mouth.

'Saving people is the fundamental duty of a doctor,' he said after the incident.

About six hours away from New York, the man's wife summoned the cabin crew and reported that her husband was having trouble urinating.