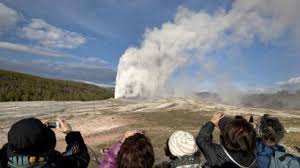 According to monitoring services from the US Geological Survey (USGS), the Yellowstone region in Wyoming has experienced 193 earthquakes in the past 28 days. All of the tremors were relatively small, with the largest registering as a magnitude three coming on November 10. While tremors in the Yellowstone region are not uncommon, almost 200 in one month is rare, with the National Park Service stating that the region usually has around 700 a year.

On the upper scale it can experience up to 3,000 quakes in a year.

And experts warn it is not necessarily the size of an earthquake which is an indicator that a volcano might erupt, but the quantity of them.

Portland State University Geology Professor Emeritus Scott Burns said: "If you get swarms under a working volcano, the working hypothesis is that magma is moving up underneath there."

However, others disagree about whether an earthquake swarm near a volcano could be a sign of things to come.

Jamie Farrell at the University of Utah in Salt Lake City, believes this is just part of the natural cycle for Yellowstone volcano, saying: "Earthquake swarms are fairly common in Yellowstone.