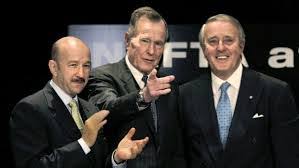 In a recent interview, President Trump confirmed that his administration is now considering categorizing "drug cartels" as "terrorists",  akin to Al Qaeda (with the exception that they are "Catholic terrorists").

They would henceforth be designated by Washington as "foreign terrorist organizations".

What is the intent?

Create a justification for US-led "counterterrorism" (military) operations inside Mexico and elsewhere in Latin America?

Extend the "War on Terrorism" to Latin America?  "Responsibility to Protect" (R2P). Go after the "Narco-terrorists".

The unspoken truth is:

1. Al Qaeda and its related terrorist organizations (including ISIS) in the Middle East, Africa and Southeast Asia are creations of the CIA.

2. The CIA protects the multibillion dollar global drug trade as well as the Mexican drug cartels. Moreover, it is estimated that 300 billion dollars (annually) worth of drug money is routinely laundered in casinos across America including Las Vegas and Atlantic City… As well as in Macau. Guess who is the World's richest casino owner.

4. Both American and Latin American politicians are known to have ties to the drug trade.